The Journal of Animal Science (JAS) is the premier journal for animal science and serves as the leading source of new knowledge and perspective in this area.

Articles published in JAS encompass a broad range of research topics in animal production and fundamental aspects of genetics, nutrition, physiology, and preparation and utilization of animal products.

Official Journal of the American Society of Animal Science

These core principles and beliefs are the foundation for ASAS and will guide the implementation of
this 5-year strategic plan.

The History of ASAS
The American Society of Animal Science (ASAS) celebrated its 100-year anniversary in 2008. During the first 100 years, ASAS broadened membership to more than 7000 members. ASAS developed diverse and dynamic membership programs, and fostered the growth of the premier journal in animal science and the premier animal science meetings. In 2008, the American Society of Animal Science celebrated 100 years of sharing great research and supporting science careers.

ASAS was established on July 28, 1908, at Cornell University, Ithaca, New York. A group of animal nutritionists, representing 13 state agricultural experiment stations and the U.S. Department of Agriculture, met during a summer school session and formed a permanent organization with a focus on animal nutrition research. On November 26, 1908, the group met and formed an organization called the American Society of Animal Nutrition. Thirty-three charter members represented 17 state experiment stations, the U.S. Department of Agriculture, and Canada.

A constitution was adopted, and 4 committees were established: 1) experiments, 2) terminology, 3) methods of reporting results, and 4) affiliation.

The objectives of the new society were: 1. to improve the quality of investigation in animal nutrition, 2. to promote more systematic and better correlated studies of feeding problems, and 3. to facilitate personal interaction between investigators in this field.

The first professional papers were presented at the Livestock Exposition Hall in Chicago from November 27–29, 1909. At the business meeting, the membership voted to publish proceedings of the annual meeting representing the first journal publications. During the first year, 100 members joined the society.

At the business meeting in 1912, efforts were made to broaden the membership base to include scientists from other disciplines. On November 30, 1915, the name of the society was changed from the American Society of Animal Nutrition to the American Society of Animal Production, and an amendment to the constitution was passed to include members interested in teaching, breeding, and management investigations as well as nutritionists. In addition, a committee on instruction was added. At that time there were 114 members.

Growth in membership was almost continuous; by the golden anniversary year in 1958 there were 1,829 members. A second name change was approved at the 53rd annual business meeting in Chicago on November 24, 1961, when the official name became the American Society of Animal Science (ASAS).

ASAS expanded to meet the diverse needs of its members by adding sections (Midwest, South, Northeast, and West) with their own meetings. In 1998, ASAS joined forces with its sister societies, the American Dairy Science Association (ADSA) and the Poultry Science Association (PSA), to form the Federation of Animal Science Societies (FASS) to help foster a voice for professional animal scientists.

In the 2008 ASAS Strategic plan, we recognized that it was time to change one of the most fundamental roles of ASAS in the field of animal sciences and in society. In addition to providing science-based information to ASAS members, ASAS began to build an external voice to communicate and distribute information pertaining to the responsible use of animals in research, teaching, and production. At the direction of the 2008 ASAS Strategic Plan, ASAS initiated an autonomous science policy program governed by ASAS that works with many other groups, created AnimalSmart.com and the accompanying Junior Animal Science program, redesigned and distributed the Image Gallery, added a global scientific magazine Animal Frontiers, created an active and respected Snack and Fact program for Congressional staff in Washington D.C., and ensured an active presence of ASAS members on Capitol Hill. As ASAS moves forward, we need to continue these programs, add to their robustness, and ensure that the programs represent the needs of the global ASAS membership.

The 2008, strategic plan helped ASAS grow and diversify its membership. An unintended consequence of this diversification was a change in the ASAS infrastructure. In 2014, ASAS sold its equity shares in FASS as FASS no longer met the growing needs of ASAS.

Since 2008, technological advances have also helped change how ASAS communicates internally and externally. For example, ASAS has globalized our communications (i.e., webinars and virtual meetings), taken posters to a new level (i.e., ePosters), created an almost continuous flow of information to the membership worldwide (i.e., Taking Stock), made it possible to push information out in real time, and has diversified our publication portfolio (i.e., Journal of Animal Science, Animal Frontiers, Natural Science Education, and Translational Animal Science) and our publications model (i.e., integration of all journals into a Digital Library, traditional publication, open access, and open review). In addition, technology has helped us add new methods to facilitate scientific communication around the word (i.e., JASEdits).

Vision for the Future
As ASAS enters its second century, we are changing to adapt to current and future conditions and environments. ASAS will continue to be the world leader as a source of scientific information on the contributions of animals to food and fiber production. We recognize, however, that animals contribute greatly to enhancing the human life and wellbeing in a wide variety of ways, including companionship, recreation, and human aid. Therefore, the broader vision of ASAS is to be a diverse community of professionals recognized as the leading source of new knowledge and perspective on animals that enhance human life and well-being. ASAS facilitates global scientific exchange through innovative and inclusive venues.

In the next century, we will look for new opportunities to partner with other professional organizations and non-traditional venues. We are working to become a facilitator of effective interactions among academia, industry, government agencies, and other stakeholders to reach consensus regarding science-based animal issues. Continued leadership in providing a scientific voice of animal science to the broader public is an inherent component in facilitating scientific exchange. To deal with the many contributions of animals to society, we recognize that it is vital for animal science professionals to be trained in a variety of disciplines. To this end, ASAS will provide member services and professional development opportunities in a proactive and accountable manner. Through our meetings, journal, and professional development opportunities, ASAS will be the training ground for future animal scientists.

*This value is calculated using ResearchGate data and is based on average citation counts from work published in this journal. The data used in the calculation may not be exhaustive. 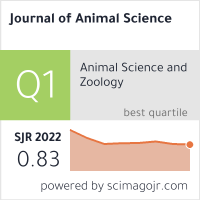 The Journal of Animal Research, which is published in Print and Electronic form by New Delhi Publisher, accepts exceptionally exciting, more...