Pakistan journal of botany - Pakistan Botanical Society is one of the leading societies that aim to cultivate, promote, and disseminate the knowledge of all the branches of plant sciences. In addition, it also aims to undertake activities which are conducive to or necessary for the fulfillment of these objectives and cooperate with other organizations having similar objectives.

PBS provides an opportunity for active research workers to present their results and to generate discussions for further planning of their research. Pakistan Journal of Botany is a peer-reviewed bi-monthly publication of the Pakistan Botanical Society.

History of Pakistan Botanical Society
Probably the first seeds for formally establishing a Botanical Society were sown in the picturesque setting at Bara Gali in 1965 where the participants of the Summer Seminar in Botany resolved to establish a national platform for all those interested in Plant Sciences. Among others who participated in these discussions were Prof. Sher Ahmed Lodhi, Prof. Majid Ahmed, Dr. Khwaja Muhammad Salim, Dr. Shah Rukh Chughtai, Dr. Mustafa Shameel, and Mrs. Rukayya Khan. The idea was welcomed by other Plant Scientists actively engaged in research in different organizations in the country.

In 1968, the Pakistan Botanical Society came into existence with Prof. Sher Ahmed Lodhi, Professor of Botany, the University of Punjab as the founder President. Dr. Majid Ahmed and Dr. S. I. Ali, shared the responsibilities as Vice Presidents, whereas Dr. Shaukat Ali Chowdhry was elected Secretary / Treasurer for the year 1968-69.

Prof. A. S. Islam of the University of Sindh was appointed Editor-in-Chief of the Pakistan Journal of Botany (PJB) in 1968-69. The first issue of the journal appeared in 1969. In 1971 Professor Islam shifted to Dacca and Dr. Abdul Ghaffar took over as Chief Editor of PJB. Since then he has been editing PJB most ably in spite of financial difficulties.

PJB, which is published biannually, has gradually gained an international reputation. A number of foreign universities and learned bodies purchase PJB and the papers (both from Pakistani and foreign scientists) published in this journal are indexed in Biological Abstracts, Chemical Abstracts, and Current Contents.

It seems that the students of Plant Sciences have always gathered together in groups to exchange ideas from time to time. For example, in 1950 Karachi Botanical Society was established and weekly meetings of plant scientists working in various organizations located in Karachi were held quite regularly at the Department of Plant Protection. After a few years, however, activities of the Society lost momentum and came to an end.

The response of Plant Scientists in the Regional Meetings prior to the formal establishment of PBS, was so overwhelming that it seemed highly desirable to continue holding these meetings under the umbrella of the PBS. This provided an opportunity for active research workers to present their results and to generate discussions for further planning of their research. Special lectures by eminent plant scientists were also arranged in order to highlight the recent trends in various branches of botanical sciences.

During the 4th National Conference of Plant Scientists the PBS General Body took the decision to bring out a Society Newsletter, which is now regularly published quarterly as 'Plant Sciences Newsletter'.

Ever since its inception in 1968, PBS has grown steadily over the years and has now a membership of plant scientists working in all the four provinces of Pakistan and abroad. The aims and objectives of PBS are to cultivate, promote and disseminate the knowledge of all the branches of plant sciences; to encourage and to stimulate interest in research in all disciplines of Plant Sciences in Pakistan; to undertake such activities which are conducive to or necessary for the fulfillment of these objectives and cooperate with other organizations having similar objectives.

Aims and Scope
The Pakistan Journal of Botany is an international journal for publication of original research in plant science. Work on all plant groups, including fossil plants, is published. The journal publishes in the areas of: ecology and ecophysiology; conservation biology and biodiversity; forest biology and management; cell and molecular biology; paleobotany; reproductive biology and genetics; mycology and pathology; and structure and development.

*This value is calculated using ResearchGate data and is based on average citation counts from work published in this journal. The data used in the calculation may not be exhaustive. 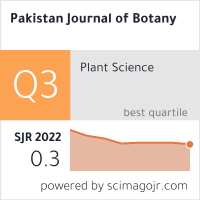